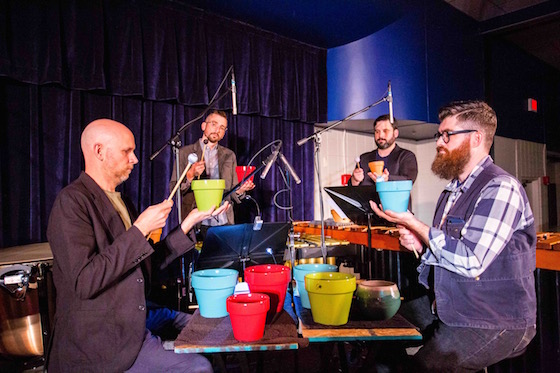 The amazing Sō Percussion opened NMNC’s Twentieth Anniversary season by rocking Club Sudakoff. They began with Paul Lansky’s Springs, which began by quietly drawing one in, but ended with a rousing finish.

The more contemplative Taxidermy by Caroline Shaw came next, played on tuned flower pots as well as vibraphone and marimba. Speech was also a part of this moving piece. 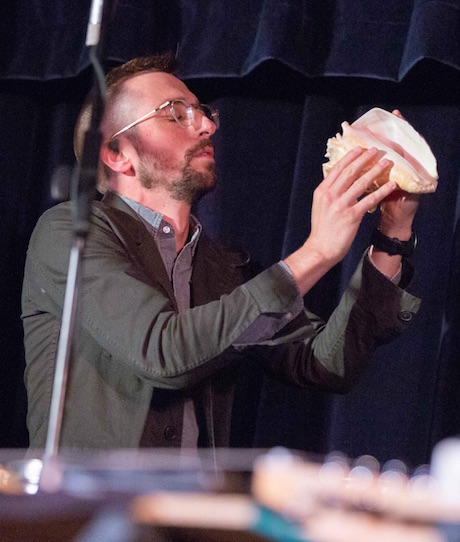 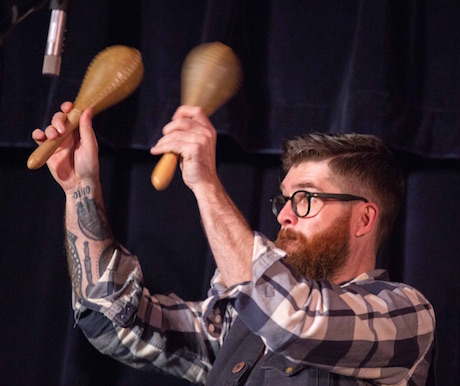 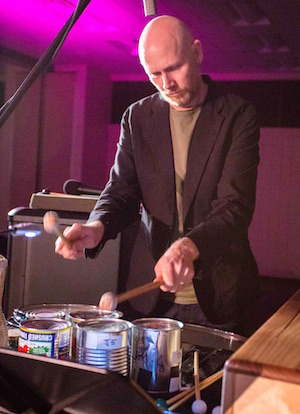 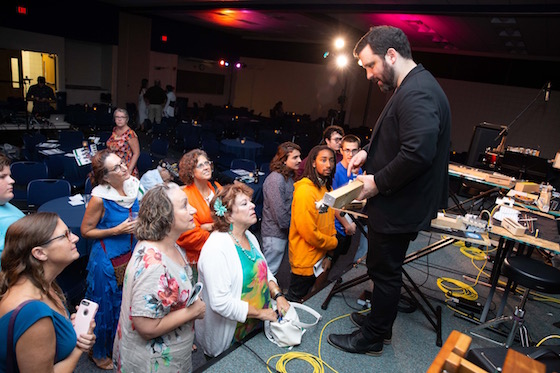 They finished the concert with an excerpt from Bryce Dessner’s Music for Wood and Strings, played using bows and sticks to make sounds on unique instruments that are somewhat like amplified dulcimers.

Composer, electric guitarist, and New College’s first Professor of Digital Media and Music Mark Dancigers led our November concert, in the Mildred Sainer Pavilion. The concert opened with two new works by Dancigers for electronics and acoustic instruments, Skyline featuring Principal Second Violin of the Sarasota Orchestra and Co-Artistic Director of ensemblenewSRQ Samantha Bennett and Everything Happens for the First Time with Brad Williams, Principal Trombone for the Sarasota Orchestra. 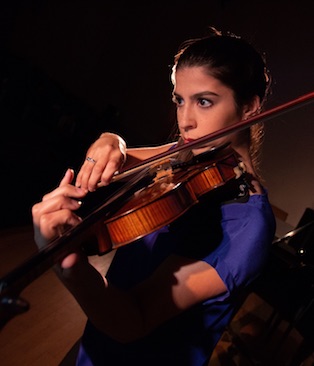 Dancigers ended the concert playing two movements of his work Jehanne, which he realized using solo guitar and looping pedals. 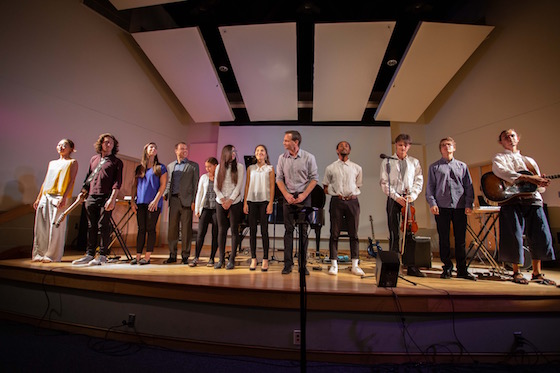 All the performers at the end of the concert

Video of When It Rains, It Rains

Chicago-based Ensemble Dal Niente came in January, along with composer and MacArthur (“Genius Grant”) Fellow George Lewis, who holds a PhD in Humane Letters (honoris causa) from New College. Dal Niente began their program with the Lewis duo for violin and piano, The Mangle of Practice.

The second piece was the haunting Like a Halo by Katherine Young (for six performers), followed by another duet, Anthony Cheung’s Refrain from Riffing for harp and saxophone. 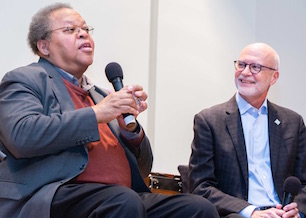 Then the stage got crowded as ten people performed Anthony Braxton’s Composition Nos. 193 and 228, and (with a few changes) ten finished the concert with Lewis’s amazing work Assemblage.

As a Special Event, NMNC in collaboration with the Ringling Museum's Art After 5 program presented a series of improvisations in the Ringling’s galleries the Thursday before our concert. Starting at 5, there was one solo (soprano) near the Visitor's Pavilion, then two more solos (flute and bass clarinet ) at 5:30 and 6 in the main Museum galleries (rooms 19 and 20). At 6:30 in Gallery 21 the ensemble performed George Lewis’s Artificial Life 2007, followed by a talk/discussion with Lewis. 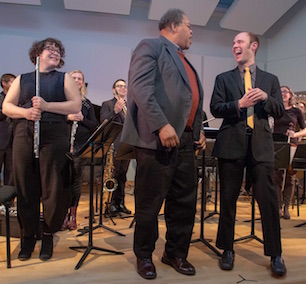 Tigers Above and Tigers Below

In this new commission Eliza Ladd (Associate Professor of Movement at the FSU/Asolo Conservatory) in collaboration with New College students Kyla Hunter, Michelle Lee, Zulfiia Tursunova, and Niko Zamora, created a score of “Live Sound Action” (her theatrical approach to composition and performance) to be performed three times in New College's Black Box Theater. Ladd’s approach, at once visual, aural, and physical, combines the sounds of objects and human movement with layers of primitive voice and song—reflecting our primordial musicality and reviving the original function of performance as a way to know ourselves, and to experience our birthright as creators. 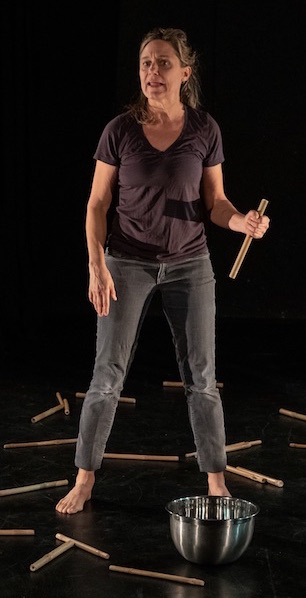 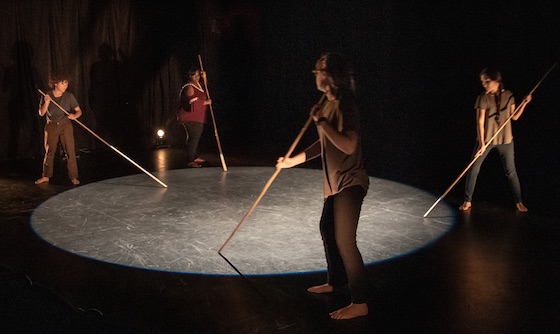 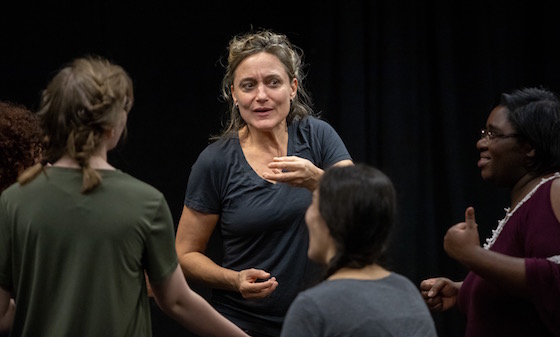 Ladd working with the students

This original composition was influenced by a theme of migration, what gets carried over time across place, and the act of searching, listening and thriving as it manifests in the flight of birds, the walking of humans, and on an elemental scale of geology. 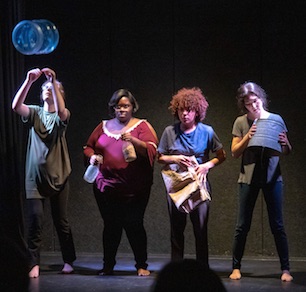 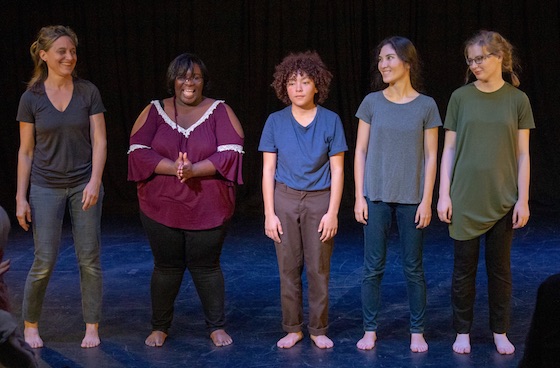 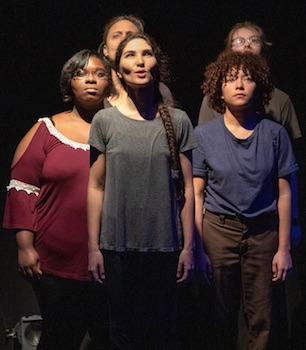 The ensemble Wet Ink returned to New Music New College to cap off our season in Club Sudakoff.

Opening with a new piece by pianist Eric Wubbels appropriately titled modules/relationships—since it is a “modular” piece in which a series of modules are performed, in a different order and in different permutations each time, playing on the relationships between the various players of the ensemble—Wet Ink immediately demonstrated their command both of the material and of their instruments. 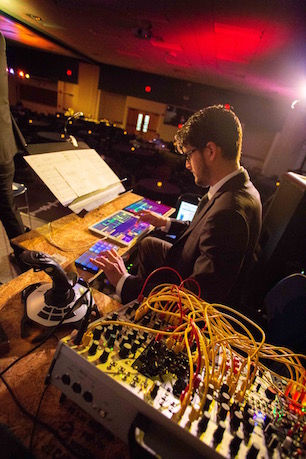 Sam Pluta, with some of his electronics

The ensemble then performed Kate Soper’s dramatic, funny, moving, and disturbing Voices From the Killing Jar (video of the first movement to the left of this). The piece uses texts from Lucille Duplessis, Gustave Flaubert, F. Scott Fitzgerald, and Soper herself, among others, to define a range of characters, all in stressful situations. 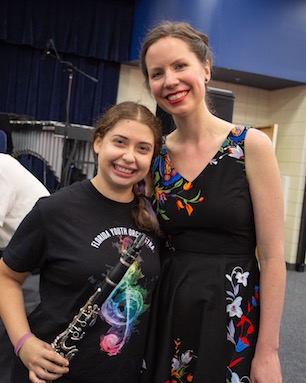 Kate Soper with New College student Rose Schimmel, who leant her clarinet for the performance 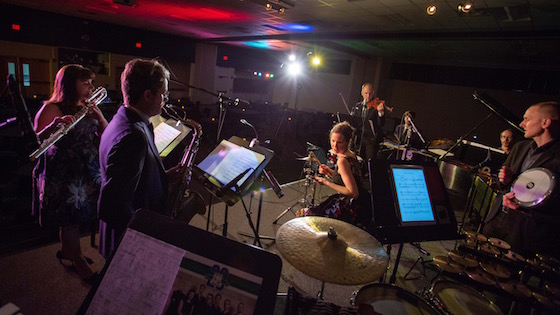 Video of the first movement of Voices From the Killing Jar 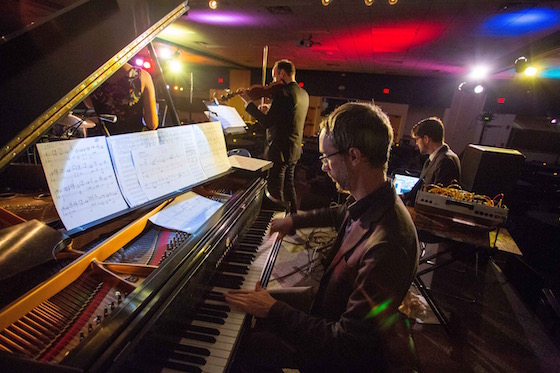 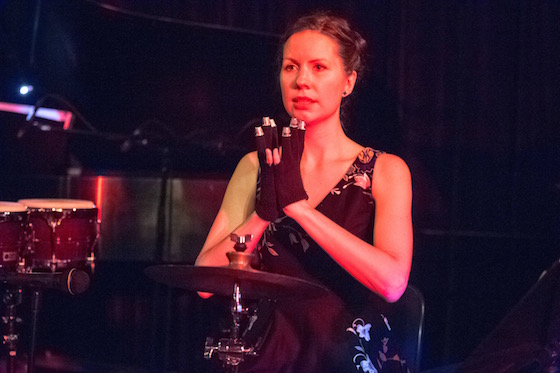 In addition to their concert and Artist Conversation, Wet Ink met with New College student composers to discuss the issues and challenges when realizing new compositions.

This season was sponsored in part by a grant from the Andrew W. Mellon Foundation.